Having seen Hertfordshire based singer-songwriter Lizzy perform at folk clubs and festivals, I was delighted when she agreed to give an interview to Unicorn Folk.

Tell me a bit about yourself and your background.
I was born into a musical family and having attended the Cropredy Festival at the tender age of 8 months, I think my life path was set! Music was given a high priority at my schools, and then I went to Liverpool University to study for a music degree. It was a fab place to learn more about music and fine tune my art and I met all sorts of people from many different genres of music – it was a great grounding.
After university, I came back home to Hertfordshire and there was a bit of a lull. It was then that I discovered Watford Folk Club where everyone was so friendly, encouraging and welcoming and I had an amazing time. I realised there was a whole community making wonderful music all year round – not just at festivals -and I’ve never looked back!
Then I entered ‘New Roots’, a competition for young performers of all styles of traditional or contemporary folk, roots or world music, run by Alison Macfarlane and St Albans Folk Music, which really inspired me.

Do you have formal musical training?
At a very early age, I was inspired by watching ‘The Young Musician of the Year’, and as soon as my hands grew big enough, I badgered my mother into taking me to violin lessons from the age of 6. The violin was a great springboard to branch out to other instruments as well as the violin. I haven’t played as much in recent years but luckily I found time to fall back in love with the violin and polished up my skills again during the Covid lockdowns – which was a joy.
In my teens I also did musical theatre and took singing lessons to understand more about my voice as an instrument. I also play the piano and mandolin which give texture to my music, and I recently acquired a shruti box and a harmonium. All these instruments come into their own on my studio albums, but for my live gigs I usually accompany myself on guitar. It’s always nice to receive positive comments about my playing and I was particularly thrilled to be described in a review by Unicorn Magazine as an ‘accomplished guitarist’.

What albums have you published?
My first EP ‘Long Story Short’ had 6 tracks and it was a great help in persuading venues to give me gigs in the early days. Then in 2019, I released and toured my first full-length album ‘Dusk’ . That was all about beginnings and endings and was recorded with Ellie McCann on banjo, Ellie Hill on violin and Kelvin Davies whose steel guitar gave a wonderful blues feel to the tracks.
May 2020 saw the release of my album ‘Seven’ – inspired by the seven oceans of the world and my family’s association with the sea and all its beauty and dangers. I donated half of the proceeds from the album to the RNLI – a wonderful charity that receives no state funding for all the incredible work it does.
All the details of my albums are on my website www.lizzyhardingham.com and my Facebook page.

Do you always perform solo or are you in any bands?
Normally I perform solo, although I was in a vocal acoustic harmony group at university and I loved it.
I’m currently applying to the Performing Rights Society and the Arts Council for funding for a new music project focusing on mental health and the gruelling effects that the pandemic has had on people. This is something that definitely needs to be talked about! If I’m successful in getting the funding, I will definitely tour with other musicians to promote the work.

Are you a full-time musician?
Not at the moment. I have a day job as a librarian and I feel really privileged to enjoy what I do to subsidise my music. Lots of acoustic musicians are librarians, and I see a big crossover between libraries and music. Both are concerned with people – communicating, cataloguing, helping others and I get lots of inspiration from the work I do and the information I come across.

What musical achievements are you especially proud of?
Two things come to mind……..When I was at university, I took part in musical theatre where I made some very close friends. I took the plunge and played the part of the witch in ‘Into the Woods’.We performed in the Stanley Theatre to some 500 people. It was a very challenging role and I had to fight hard to overcome a lot of self-doubt to do it, but it taught me a great deal about controlling nerves when performing.
And in April 2020, just as the first lockdown hit us, I wrote a song all about dancing as part of a project. I invited friends and fans to film themselves dancing to the song and to send me the videos. The response was truly amazing – as well as videos from friends and fellow artists such as Joshua Burnell and Minnie Birch, I was thrilled to get responses from complete strangers – even care home residents joining in and people dancing in their kitchens! Look for ‘Dance with Me’ on YouTube. You’ll also find it on my Facebook channel and on Bandcamp.

What is the biggest barrier to success that you have had to overcome?
Just after I finished university I was diagnosed with rheumatoid arthritis – an auto-immune condition that can cause pain, fatigue and joint damage. This was potentially devastating news for a musician, so I had to learn how to deal with the implications for my life. I am deeply grateful for the support of Watford Folk Club who helped me through that period and allowed me to see that it might just make me stronger. So now, instead of worrying what might perhaps lie ahead, I say ‘I can do things now – so get on and do them and let the future take care of itself!’

I have watched you perform and I’m always impressed by the rapport you create with your audience. How did you develop this skill?
I think it is partly my theatre training – I’ve had lots of experience getting comfortable on stage, playing roles. But as a solo musician, you’re really exposed and I found it nerve wracking, especially when I started in 2018. Many artists compensate for this by focusing on being note perfect and sometimes they forget to even look at the audience. I find it helpful to remember that people have actually come to see me and they want to hear and interact with me, so that usually gives me the confidence to focus on the audience and not on my nerves! I’ve learned that it’s the overall experience for the audience that’s important – not having a perfect technique. Of course we all try to perform as well as we can, but the occasional wrong note or fluffed lyric is not the end of the world.

What have you been doing during the pandemic? How have you kept yourself motivated?
Music has been a massive help, although it has been a tough time for me as it has been for everyone.
In December 2020, when we were all finding it difficult to celebrate Christmas, I recorded ‘December Delights’ – 24 short split-screen videos of Christmas songs (one for every day of the month up to Christmas Day) and posted them on YouTube. I raised £800 for the charity Versus Arthritis www.versusarthritis.org and lots of people got in touch to say that although they were having a rough time, the project had brought them fun and jollity during the festive season. I’m rather proud of that.
I also produced two singles – one with Lucas Drinkwater (on electric bass and guitar) about mental health which helped me to focus at a very anxious time, and the second in February 2021 after we had been in lockdown for several months. This was a sort of anti-Valentine track called ‘Orpheus’.

Where do you usually perform?
My usual venues are folk clubs, arts centres and festivals, but I also perform in lots of acoustic venues including cafes and restaurants.
This August you can see me at the Purbeck Valley Festival 19-22 August and at the pint-sized Towersey Festival over the Bank Holiday weekend.
I’ll also be gigging in September in St Neots and on the South Bank among other venues.
Full details are on my website www.lizzyhardingham.com and my Facebook page, Instagram and Twitter.

What are your plans/ambitions for the rest of 2021?
At the moment, my primary focus is on the mental health project with interviews with other musicians that I’m trying to get funding for. It will feature interviews with musicians about mental health, interspersed with music and songs. That’s taking most of my time and energy when I’m not performing.

What advice would you give new musicians?
I would advise that early in your musical career, you should network and make as many contacts as you can. Enter competitions where you will meet people you wouldn’t normally come across, and accept all invitations to play. Say Yes! to everything – because if you don’t ask, you don’t get. You have to put in the effort, because if you email 100 clubs, you might be lucky enough to get 10 gigs. But if you don’t send those 100 emails you won’t get any gigs! And remember – the worst that can happen is that someone will say ‘No!’.

Is there anything else you would like to share with Unicorn Folk?
I’d like to thank Unicorn Folk for the opportunity to do this interview and for all the album reviews that were published in the printed magazine. I wish Unicorn Folk every success, and I promise I will do everything I can to tell people about it. 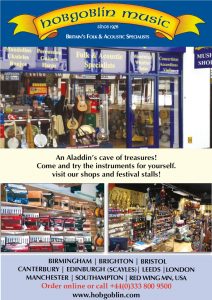